Dénia has been one of the three cities around the world that has participated in the inaugural session of the XIV Annual Conference of the UNESCO Creative Cities Network, held in Santos (Brazil). On behalf of the mayor, the Councilor for International Relations, Raúl García de la Reina, presented Dénia's experience within the UNESCO Network to delegations from nearly 300 cities on five continents and how its presence has influenced the action and local projects. 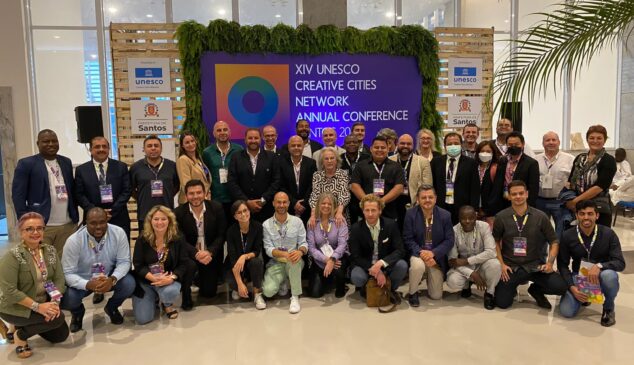 Meeting of the Creative Cities of Gastronomy

Santos, Creative City of Cinema, received the UNESCO Creative Cities with the image of the legendary soccer player Pelé, who played in the ranks of the local team, cultural activities throughout the city and the rhythm of the samba.

The Secretariat of the Network expressly invited Dénia to speak about the reciprocal contribution between cities and UNESCO at the official opening session of the conference, convened this year with the theme "Creativity, Path to Equality".

Raúl García de la Reina pointed out in his speech that the Network of Creative Cities has been an essential instrument to reinforce the gastronomic-tourist potential of the city, increase public and private projects in the agri-food field and promote gastronomic education and training . In conclusion, he said that "with the program and values ​​of Creative Cities, the ideal conditions have been created to promote projects in line with the SDG." 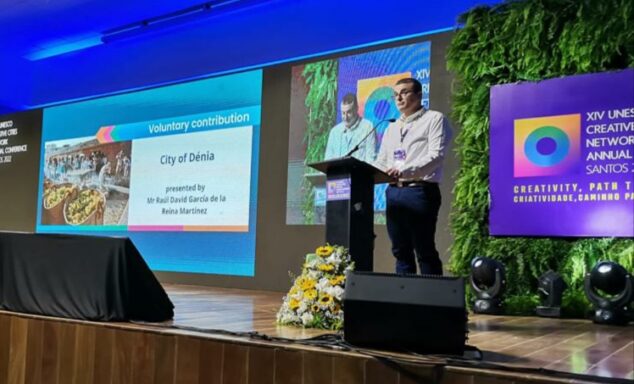 The Dénia delegation participated in the Mayors Forum, was entertained by the mayor of Santos, Rogério Santos, and established contacts with the representations of numerous creative cities from different fields, in addition to participating in work meetings, workshops and a forum convened by the organization . The conference was closed last Friday by UNESCO's Director of Culture, Ernesto Ottone, who underlined the role of cities as agents of transformation: "We trust in the power of cities to face major global changes."

Wheat, flour and cakes from the Navy

Dénia also had an outstanding presence in the session "Breads of the Creative Cities" (Pans de las Ciudades Creatives), convened by the ITKI Foundation which, in collaboration with different cities of the UNESCO network, works to collect cultural traditions and the transfer of knowledge between generations.
Floren Terrades, director of the Office of Innovation and Creativity, presented the experience of recovering the wheat of the Riurau de Jesús Pobre Association (the Blat de la Marina project), the manufacture of artisanal flour by the La Farinera and the tradition of a bread dough as popular as the Marina cakes. 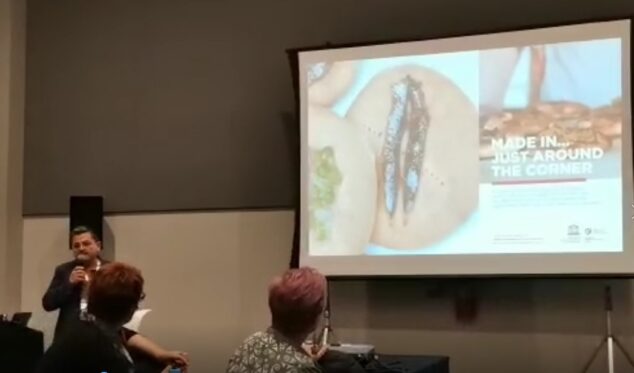 Presence of wheat and Navy cakes in “Breads of Creative Cities”

All this information has been incorporated into the foundation's documentary records, which are made available to the public on its networks and published annually. At the 2018 assembly, in Krakow (Poland), Dénia had already contributed the "Easter mona" and the knowledge of the baker Raquel López.

The impact of the Cities of Gastronomy

The conference program included the usual sectoral meeting of the cities. Dénia met with the rest of the delegations of the Cities of Gastronomy of the Unesco Network. The report presented highlights that the field of gastronomy has experienced a significant increase since 2015, precisely in the year in which Dénia's entry was accepted, going from the 20 that existed at that time to the 49 currently, eleven of the which are located on the European continent.

The balance indicates that between 2021 and 2022, despite the pandemic, the Creative Cities of Gastronomy have launched 317 initiatives, more than half of which correspond to economic development projects and a high percentage, 41%, to actions aimed at strengthening the cultural identity of the territories.
In the examination carried out in the cities there has been a section exclusively dedicated to actions oriented or marked by the 2030 Agenda promoted by the international community and the achievement of the Sustainable Development Goals (SDG). The group of cities of Gastronomy counts 195 initiatives in this sense, among which those that, like Denia, promote projects on responsible production and consumption and the recovery of the territory have an important weight.

In the context of the meeting, the Dénia delegation had the opportunity to greet and establish close and direct contacts with the cities recently incorporated into the Network.

Cities prepared for the future

In the final declaration of the Conference of Santos, Creative Cities have strengthened their commitment to comply with the mandates and principles of UNESCO and, in particular, with regard to the promotion of international cooperation and solidarity to achieve the Agenda 2030 of the United Nations and the Sustainable Development Goals.

The document advocates for a more meaningful and insightful integration of culture and creativity in post-COVID-19 recovery policies and plans, through a greater exchange of experiences, knowledge and good practices.

The conclusions of the Creative Cities will be one of the documents of the World Conference on Cultural Policies and Sustainable Development (MONDICULT 2022) organized by UNESCO and which will bring together Heads of State and Government in Mexico City next September.

The next conference of the UNESCO Creative Cities Network will take place in 2023 in Istanbul (Turkey) and will have the theme “Future-Proof Cities”.

The Marina Alta will say goodbye to the summer with a long yellow alert: is a cold drop waiting for us?
21th September 2022

What are the sandy beaches of Dénia?
21th September 2022