Las Fallas over Dénia, Carla Petrie and Candela Pastor, were the great attraction of the Dénia stand in Fitur, the tourism fair that is held during these days in Madrid. On Thursday the Valencian Community Day was celebrated at the fair, and as usual, the highest representatives of the failures Dianans attended their annual meeting with tourism. 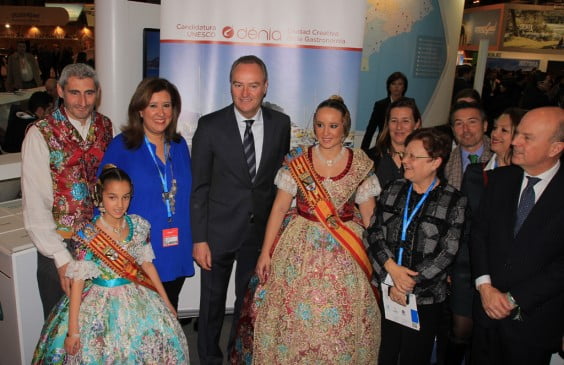 The president of the Local Board Fallera, Jaume Bertomeu, Was at all times next to his Falleras Majors, also attending to the hundreds of people who approached to photograph with Carla and Candela.

During the day the major falleras of Denia also visited the stand of the Hogueras of Alicante and received in the stand of Denia, next to the Dianan delegation, the visit of the president Alberto Fabra, The Minister of Tourism, Máximo Buch, and the president of the Diputación de Alicante, Luisa Pastor, among others.

In the last hours the mayor of Denia, Ana Kringe, Attended the ceremony of delivery of flags of Nautical Stations together with the general director of Tourism, Sebastián Fernández. On Thursday morning he also received the Qualitur tourist quality award and the diploma of recognition of the commitment for the improvement of the tourist quality and the effort made for the implementation of the Integral System of Spanish Tourism Quality in Destinations (SICTED).