Next Sunday, June 23, Dénia will celebrate the traditional night of San Juan, with thousands of neighbors and visitors crowding the beaches from the municipality to fulfill the rituals of that magical night.

But after the party, it becomes necessary for everything to return to its place. So, in addition to appealing to the citizenship of the users of the beaches, so that they collect the dirt generated during the night, a special monitoring and cleaning device has been established from the beach department. 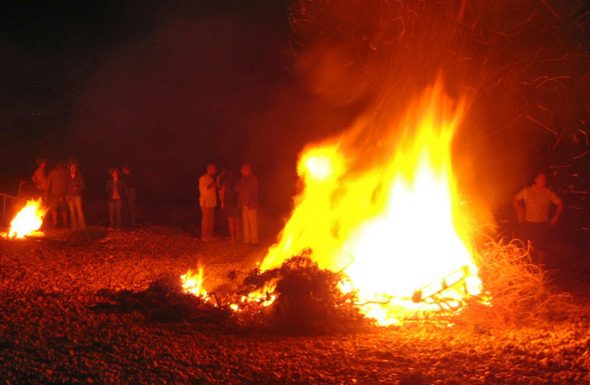 The works will start at the 4 in the early morning and involve a reinforcement in the human and mechanical means of cleaning the coast.

In general, cleaning work on the beaches will consist of the cleaning of the sand by mechanical sieving, the mechanical collection of fires and the manual collection of waste. The usual equipment provided in the beach cleaning service carried out by the Pavasal concessionaire will be reinforced with 2 trucks, a front loader and a mixed backhoe. Human resources will also be increased with 12 extra operators and 3 drivers, which will be added to the usual workforce of 8 operators, 2 drivers and 1 in charge.

The PATIVEL requires to adapt the cleaning on the protected beaches

Taking into account these considerations of the PATIVEL, on the natural protected beaches of Punta del Raset, Marines (from Albaranas to Bassetes Park) and Molins, which register a greater influx of people during the Night of San Juan and, therefore, accumulate more dirt that makes it necessary to mechanically screen the surface, the council has established that the screening machinery and trucks will only operate in the first 10 meters inland from the seashore to avoid damaging the dunes and the fauna that inhabits these spaces.

Likewise, a shelter of some 30 meters will be left to count from the dunes in the case of Punta del Raset, and of 15 meters in the beaches of Les Marines and Molins, where no activity will be allowed that generates dirt and implies the use of a screening machine for cleaning. For this reason, the strip will be delimited and the shelter area will be marked with beacons and informative signs. Also, users are recommended to access these beaches by the footbridges and avoid stepping on the dunes.

The security forces have also established a special surveillance device during the Night of San Juan, which will start at 22 hours and conclude on the 6 in the early morning. The service will be reinforced with four more patrols by the Local Police and three by the National Police.

The weekend storm leaves 900 tons of seaweed on the beaches
August 31st, 2020

They raise the red flag on all the beaches of Dénia
August 29st, 2020

A woman suffers a head injury after a detachment in Les Rotes
August 28st, 2020

They restructure surveillance on the coast of Dénia to provide service on all beaches
August 28st, 2020