One more year Cyber ​​arena wants to involve its customers and friends in one of the most important votes of the year: the 2013 choice Gadget. From Cyber ​​Arena they have chosen the 10 gadgets that in their opinion have innovated this year and propose you to participate in the vote, thanks to which you can win (to choose) a PlayStation 3, a Nintendo 2Ds or a tablet of 10 ". 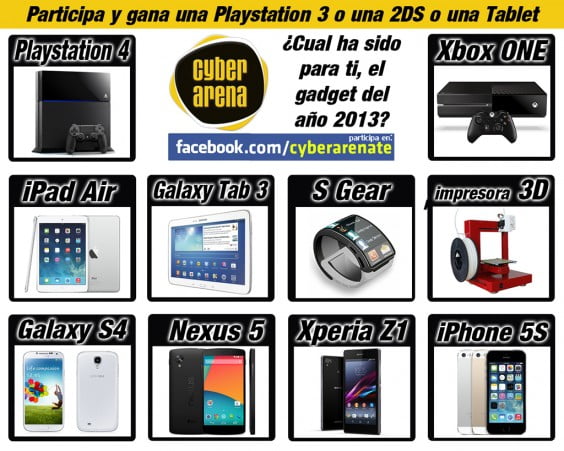 Every year that passes the technology is advancing. Humanity is assuming it and is increasingly linked to it. Smartphones, tablets, smart televisions, new watches, and many more technological devices are becoming more and more present among us.

We said goodbye this 2013 10 with a series of products that have been the highlight. I have collected the most common between us, nothing that has been prototyped, or has been sold very little that has barely seen. I have chosen products that really have been integrated into the market.

The printing technology in 3D is already a reality. With these printers we can print a figure of ourselves. Objects in 3D of all kinds. This year has been news for good and bad, depending on how you look at it. A student in the United States made a gun with a printer. And also a doctor managed to save the life of a child with a coronary problem, thanks to the development of a piece with an 3D printer. I could not miss this list.

Google and LG has brought us the best smartphone in quality and especially in price. It came out after iPhone 5 and has been a success. Design, power and stability. With its Qualcomm Snapdragon 800 2,26GHz chip, Ram 2 Gb. Incorporated the new version of Android 4.4 KitKat. To all this if nobody surpasses it technologically, neither does it in its price. From 349 € is the bargain of the year 2013.

This year was the chosen one, 2013 brought us the new Microsoft console. Xbox One comes to occupy the scepter of our room. A new era is approaching. Its competition is Playstation 4, technologically almost equal. Here the most important decision is whether the exclusive games you like or not. Halo, Dead Rising, Forza Motorsport and more. Its price is 499 € with camera kinect included.

Sony has managed to reinvent itself. Playstation 4 presents a special design, small and powerful. In this it is not exceeded. Once again just as in Xbox should be taken into account exclusive games that will come only on this platform, we talk about Gran Turismo, God of War, Uncharted, and some more. The 399 € output price. It has become a sales success this Christmas.

They have entered this year strongly. They are smart watches. From first you can already see that it is a modern and futuristic design clock. Has a screen AMOLED 1.63 inches. And we can take pictures, read mail, twitter, and notifications reach us at (Android). when you turn the wrist gestures are active. It is a first-to-market, and has left many things to polish.

One of the surprises of the year. Sony has been able to put itself on the front line in smartphones. And Xperia Z1 presents an improved Xperia Z version. The most remarkable thing about Z1 is that you can take pictures underwater. Yes, as you read. We can make videos and photos under water. An impressive camera, processor to the last, big screen. Sony Xperia Z1 is a bomb of 2013.

One of the most anticipated moments of the year. The presentation of iPhone 5S. Queues of days, at the doors of Apple stores. Impressive the impetus that causes Apple. It presents the first smartphone with 64bits, with the powerful A7 chip, the new fingerprint reader. And to liven up the iOS function 7 is responsible for developing an incredible technological melody. Its price is dizzying. From 699 €.

He was missing, after several years. Finally, the design of the iPads has changed. They have improved their weight, their size thinning the edges, but with the same 9,7 screen. " Inserting inside the new chip of the iPhone 5S to 64 bits the A7. Has achieved an insurmountable Tablet in speed, fluidity and satisfaction. Is it the perfect Tablet?

Samsung does not stop and has shown once again shows a tablet at. He has brought in various sizes in 7 "8" and 10'1 "suitable for all tastes. A superb design and incredible power result in the best Android tablet available. Thus it is always a great compatibility with all applications and connections. Price from € 199 make it very affordable.

It is the best selling, most affordable. Early skeptics did not see much change on the predecessor Samsung Galaxy S3, but time has shown that it is a much better phone. Speed, design, and quality. It's behind the new Nexus 5, 1 Xperia Z5 or iPhone, but it has been the first came, which the 2013 has been his year, and many will have been the best of 2013.

You can participate right now through Facebook. Do not miss the opportunity and choose, with Arena Cyber ​​Games, the Gadget 2013!