The Association of Friends of Joguet promoted the foundation of Toy Museum in the year 1999 and collaborated with the City donating representative pieces from different eras. Association for this museum has a special value because it is one of the few monographic museum so complete that exist at national and European level.

The Association of Friends of Denia Joguet emerged in 1995 with the main objective of spreading the history and tradition of the thriving toy industry that developed in Dénia over the first half of the twentieth century. This entity is composed of members interested 60 recover toy culture created in our city, mainly manufacturers of toys, children and grandchildren of manufacturers, toy collectors Denia and other parts of the Marina Alta. 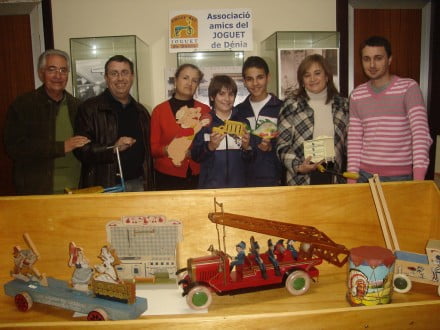 Mayte Carrió, president of the Association, explained that "the idea of ​​creating this group emerged at the magazine Toys and Games, which was the most important in Spain. It habalaba of Ibi, Barcelona, ​​but the toy industry in Denia was not in any place and from there began to document ourselves, to move in an organized way to make it known. "

Rosario Carrió, who is also a member of the association, says that "another reason to start this task of dissemination is that we realized that many people of our generation did not know that Denia had been a key part of the toy industry in the country point ". "We also decided that the people who worked and learned firsthand this activity was older, and it was essential to his testimony to document the important contribution of the toy industry in Denia"

The lines of action of this entity incident from the beginning, according to Mayte Carrió, to promote all kinds of promotional activities, "to connect children with toy Dénia, such as playgroups, workshops, school camapañas, contests, storytelling, games the street, which is very successful ... "to implement these initiatives, the partnership has been supported institutes and many teachers who have been involved in this task.

The organization of the Toy Fair and Antique collecting is another line of work of the association. "We started this Carrió remembers Mayte fair, riding a small exhibition in a street shop Diana and then we had to Campos streetWhere we celebrate each year in late December ppor very good reception of the public. " On the other hand, the association is always looking to recover and buy toys to enrich the museum's collection and publishes catalogs to report new acquisitions. Recently the association has restored two pieces, which are already cedidad and ready to move to the museum, according to Mayte Carrió.

Mayte Carrió has expressed the willingness of this group to continue advancing in the recovery effort and dissemination Dénia toy. Regarding the museum, the association insists its interest in actively participating in the revitalization of this space, "we would like to be alive, constantly updated". To achieve this, the council proposed the creation of a trust or other entity of this type, "involving different agents responsible for maintenance and promotion, declares Rosario cariogenic" We believe that this could be established very good dynamic for share different points of view, distribute and coordinate work ... we are open to all possibilities. "