Compromís per Dénia has wanted to join the signs of discontent of citizens and merchants, as well as other political groups, due to the delay in the installation of the lights of Christmas in the streets of Dénia. 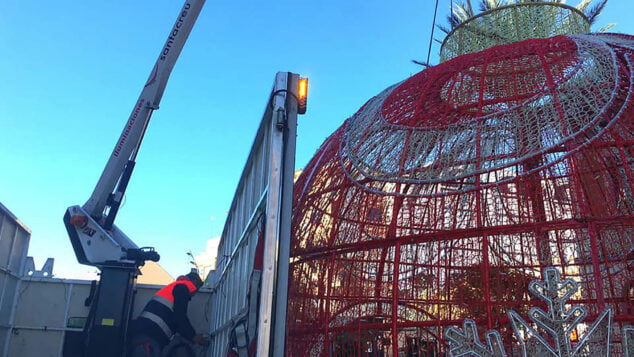 Installation of part of the Christmas decoration in La Vía street

According to a statement made by the local Executive of Compromís "it is inadmissible that a government team with an absolute majority, with councilors and staff to spare, have not managed in advance and in advance a detail such as putting the Christmas atmosphere in the city." Thus, they consider that the reasons they communicate to the official account of the mayor of Dénia are "very obvious excuses."

In the first place, the mayor explains that the lighting of lights has been postponed due to the celebration of D * na because they have given priority to it over the installation of lights in various parts of the city, "so as not to interfere with logistics" and that will be held on December 11, during the Nit de la Llum "To be more than ever a night of light."

But from Compromís they say that the DNA infrastructure is in the center of the city, and it is a festival managed by the Mayor's Office and Tourism, nothing to do with the council that is in charge of the Christmas decorations, as well as they affirm that the award of the contract is carried out, according to the minutes of the hiring table, on December 2. For all this they consider that: “although the delay in turning on the lights is not the end of the world, these details show that they continue to sell us smoke on social networks, and that having a government with so many councilors who are supposed to work with a leaf of route, they have not been able to fulfill a so simple task in any city as it is the illumination and Christmas decoration ”.

In addition, “the City Council has to work for the entire city, not only for its center, where the festival infrastructure is located, and the mounting of the lights does not interfere with the development of the festival program or the restaurants, but on the contrary , it would have been a plus to have them during the festival ”.

“It is clear that the D * NA is very important and very attractive for tourism, but the Christmas atmosphere that all businesses, private companies and cities in the world already have in place is also important, not only for tourism, but also for local commerce ”, consider the Valencianists.

In addition, they criticize that the lack of forecasting of the contract bidding has forced them to “hurry and run an alternative from under their sleeves, making them believe with beautiful words that it is to give prominence to local commerce, while it has already had for some time. days its decorated shop windows and needs to be encouraged every day, not only at the Nit de la Llum ”.

37.861
4.428
12.913
2.440
We use cookies necessary for navigation and traffic analysis. We do not use cookies that provide us with personal data or advertising cookies.
More optionsACCEPT
Manage consents