Compromís, Ciudadanos and Gent de Dénia adhere to the request of Iaioflautes de la Marina Alta to urge the government to carry out an audit of the Social Security accounts

Last week, the Platform of Pensioners (Iaioflautes de la Marina Alta) asked the municipal groups of the Dénia City Council to adhere to the request of the COESPE (State Coordinator in Defense of Public Pensions), which proposes to urge the government of Spain to carry out an audit of the Social Security accounts to quantify the total amount of the so-called improper expenses in charge of social contributions, and with the objective that "Citizens have a reliable image of the situation of the S / S from the precise knowledge of the decisive role it has played in the construction of the Welfare State"says the motion. 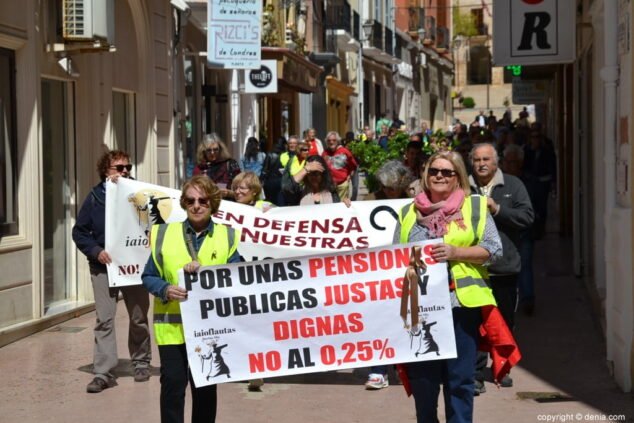 Archive image of one of the platform's mobilizations in 2018

The platform stated in its letter that, recently, in the Congress of Deputies, in its Commission for Monitoring and Evaluation of the Agreements of the Toledo Pact, a report was approved in which it was collected that "The Commission also confirms that social contributions continue to defray expenses of a non-contributory nature that, strictly speaking, should be assumed by the State through contributions to the Social Security budget". Therefore, from COESPE they defend that the contributions of workers have been used for other uses different from the payment of contributory pensions, and that the pay-as-you-go system, the basis of our Public Pension System, has been and is self-sufficient to cover pensions. For all this, they request that a study be prepared that reflects to what extent social contributions assumed the burden of financing other State policies for years.

Even so, it is explained in the motion that “The Ministry of Inclusion, Social Security and Migration has recognized the amount of improper expenses in charge of the S / S at 22.300 million euros per year in 2020, and that the Court of Accounts also quantifies in a report 103.690 million euros the Social Security resources used improperly in the period prior to 2018 ”Therefore, COESPE has started a campaign to collect signatures, in addition to promoting this motion, which will be debated in the Ordinary Finance Committee this Friday.

Following then the recommendations of the Commission for Monitoring and Evaluation of the Agreements of the Toledo Pact, and showing support for the request of the Platform of Pensioners (Iaioflautes de la Marina Alta), the municipal groups Compromís, Citizens and Gent of Dénia in the City Council have wanted to show their support for the request to carry out an audit of the accounts, as well as to urge that once the amount is established, the appropriate compensation is enabled in the Caixa Única de la S / S.