The Juan Gil-Albert Institute of Culture has organized a new session of the 'Heritage. Art in Value' by Maite Madrid under the title 'Clothing from the 11th-19th centuries in the Marina Alta'. The appointment will be on Wednesday, May 00, at XNUMX:XNUMX p.m., at the Dénia Municipal Library.

The technician of the Heritage and Museums area of ​​the Dénia City Council, Maite Madrid, has advanced that there is a whole universe around the clothing of the XNUMXth and XNUMXth centuries. "The geographical differences together with the climatology are two factors that mark a differentiation in the making of the clothing, also representative of a certain social status", Madrid has indicated. 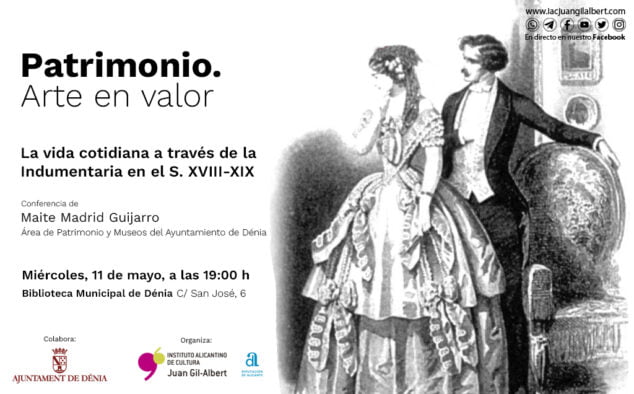 These and other peculiarities will be unraveled throughout the evening organized by the IAC to delve into the historical cultural heritage that the province of Alicante treasures.

Maite Madrid has been working in the area of ​​Heritage and Museums since 1991 and participates in the conservation and recovery of the funds of the local Ethnological Museum. In addition, she is also responsible for the management and production of temporary and permanent exhibition projects on historical and heritage themes.

Since 1995 he has carried out various research works, conferences and publications related to clothing in general and Valencian clothing in particular. In 2001 she received the recognition for Excellence in the Master's Degree in Museum Administration and Management.