Participation in the new edition of Participatory Budgets plummets

Participatory Budgeting is one of the star projects of the Dénia City Council in recent years. Both in this legislature and in the previous one, the consistory bet everything to take the initiative forward, committing to increase the game by 25% each year, reaching this edition € 300.000. However, despite having the largest budget since its creation, the response of the public has been laughable. 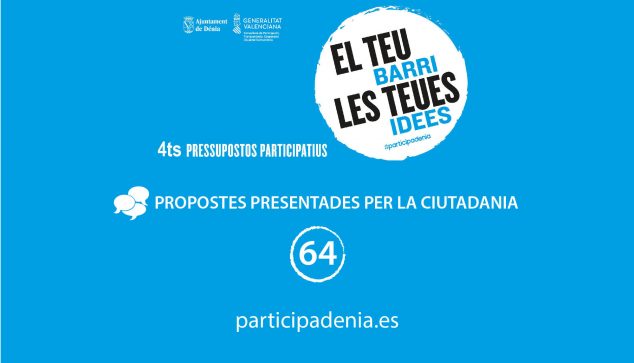 Publication of the proposals collected from the 2020 Participatory Budgets

The € 300.000 item is intended for those projects that the citizens present and that they themselves vote once the City Council technicians give the go-ahead. Last year it had a large wave of participants, with the edition that collected the largest number of proposals: 232. In addition, in 2018 and 2017 the number of projects collected was greater than in this year, with 92 and 98 respectively. This year the figure has fallen dramatically to only 64 proposals submitted, despite the fact that they increased the submission period by several days to collect more.

The development of the proposal collection phase is done through the web, so the confinement, at first, should have been an incentive for the neighbors to share their projects. However, apparently the information did not permeate Dianenses, possibly due to insufficient management of online actions.

Now it will be time to put to the vote among the projects that will be executed in 2021, with the highest economic item for the Participatory Budgets with the lowest participation in recent years.

A major nightclub closes its doors due to the coronavirus
August 03st, 2020
Leave your comments