The first Intensive Spanish Workshops at UNED Dénia that took place from 16 to 27 from September to Monday from 10: 30 to 13: 30 hours. The Spanish workshops, organized and taught by CA UNED Dénia, are aimed at foreigners who live in Spain and are curious and desire to learn more about the language, culture and customs. 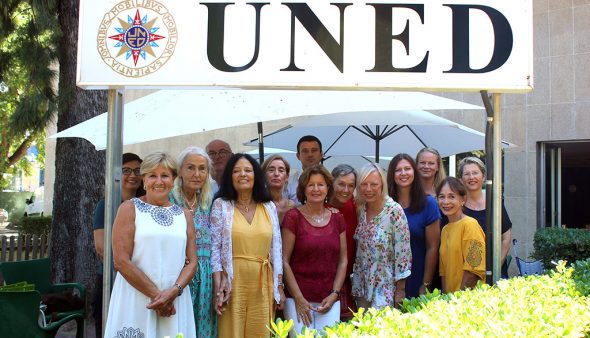 Students of the intensive Spanish workshops of UNED Dénia

This has been the first year that the workshops have been held in intensive mode, confirming their good reception through the students. Martina, an intermediate level student from Germany, commented at the end of the workshop that “The intensive course was perfect to review and deepen what I learned last year. It was a lot of fun and I learned a lot. Many thanks to Victoria ”.

The Intensive Spanish levels taught this year are "Initial: We live in Spain 1" and "Intermediate: We live in Spain 2". To know the level, the students took a test before enrolling in the corresponding course.

The teachers of the workshops have been Victoria Monera, a graduate in Hispanic Philology and a professor-tutor of the UNED de Dénia, and Carmen Martínez, a graduate in English Philology.
The closing ceremony was in charge of Carmen Mas, Psychologist, Tutor Professor and Coordinator of the COIE of the UNED CA DENIA who highlighted the degree of student satisfaction that at all times showed a great enthusiasm to learn the language and integrate into the local culture.

In these courses, in addition to improving the level of Spanish, Spanish culture has been learned in a relaxed and fun way.

Although the Intensive Spanish Workshops have already been completed, the enrollment for the Spanish Workshops for Foreign Persons that take place during the year is open, which can be done online or through the Student Secretariat of the CA UNED Dénia.