Balance of the PSPV of 2020: "Hui acomiadem, per fi, one of the most complicated years of the last decades"

Hui acomiadem, per fi, one of the most complicated years of the last decades. One year, 2020, marked by the crisis of COVID-19, which is going to surprise me while I try to solve the devastating effects of the storms derived from an other crisis, the climatic, long announced but still considered fins at the moment. 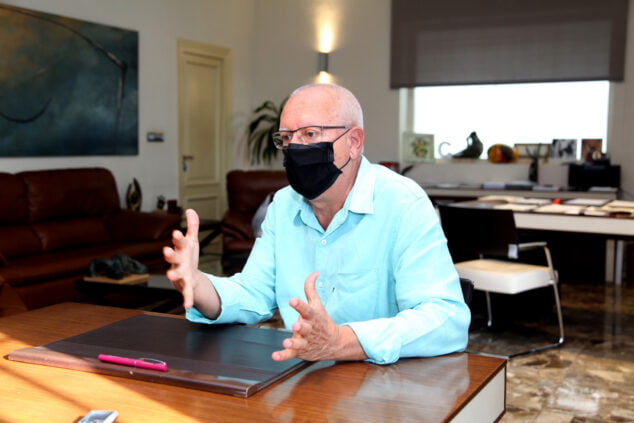 Vicent Grimalt, mayor of Dénia, during an interview granted in September to this medium

These mesos, the dynamics of treball has changed; In hem vist we are obliged to adapt day by day to the most unexpected situations, to an unpredictable way of functioning, from home, both extreme security measures, fent el cor fort per to continue endavant malgrat les baixes i les notícies sad i hopeless that ens have accompanied enguany. But I grew up can I will say that the government of Dénia has known to be at the height and manage the local public policies in a way that is close to the city.
Some are aware that lived a historical moment and that, more than today, the mandate of the citizenry rebutted in 2019 -also a majority of 12 of the 21 councilors and councilors of the Municipal Corporation- calia exercised the maximum responsibility and dedication, the mateixa amb que els veïns i veïnes de Dénia have fetched front to this situation.

The result is that, despite the difficulties, the government team has advised that the city is not paralitzara and that the development of a more sustainable Dénia, habitable and measures of the people continue the seu path while overcoming the pandemic .

We can summarize in 6 points the most important fites:

1. A government program that has continued the seua march. Malgrat the pandemic and some other fets, the full route that we are going to start in 2015 in has marked the path that semblava quai impossible to follow. The recovery of public countries, more social politics, the increase of participation, transparency and the good government, in they are basic pilars. All the parties affirm that they are going to turn Dénia into a modern city, but it is our government that has carried out the greatest transformation of the city in recent decades. Transformation that continues in progress: in a few weeks the redevelopment works of Carrer Major, Carrer del Pare Pere and Plaça de Valgamedios will be completed; During 2021 we hope to start the remodeling of Glorieta and the carrer del Cop i of Ramón i Cajal, between altres exemples.

I understand that this unstoppable advance in the execution of the projects committed to the citizenship supposes for the remaining partits representing the consistori a training session to those future aspirations. But the government of PSPV-PSOE If there is something I think that I can boast with peace of mind, it is to be an agile and good manager, the pressures, the subsidies, the bidding of works ...

A bad government would mean an opportunity for them in other electoral events. But nosaltres vam promise a bon government to the citizenship.

2. Since June 2019, the opposition just repeated as a mantra in the critical questions that we are 'totalitarian' and apply the 'roller'. Les mentires, amb fets cauen:

- During 2020 they have approved 70% of the accords of the plenary unanimously of all the groups.
- They have approved joint motions of all the parties and some others that the PSPV-PSOE of the most groups of the opposition have presented.
- Regidors of opposition groups have special delegations (clavegueram, animal welfare) and treballen colze with colze with the government.
Per tant, it is not sustained l'acusació of totalitarianism, so hackneyed. Potser in fan ús only to hide that they cannot follow the rhythm of treball i compromises That the socialist government with the citizenship teaches you; and that they are not an alternative to the current government.

3. Our priority is clear: first, the people. I eixa is the bet that the citizens of Dénia will also grant us the absolute majority.

The process of pedestrianization and recovery of public countries, com in the house of the Carrer del Marqués de Campo, not marxa enrere i for various reasons:

- At the moment, it faces a trobem in a situation of sanitary emergency and to ensure the social distances in the street more transit of the city. The tancament has the possibility that the hospitality sector can work and reopen terraces after the confinement.
- The more than 3.000 places of free parking that you have in Dénia, at the voltant d'un center accessible to a maximum of 10 minutes a few minutes from qualsevol public parking, allow the tancament of Marqués de Campo, or other carrers com la Mar or Diana, follow a reality that I appreciate and can gain, follow the exemple of large European cities with a volume of cotxes undoubtedly greater than that of Dénia.
- Continue betting for a city full of fum, impassable because of the vianant and scarce of passable countries, is to continue anchored in the passat.

4. The easy critique of the sous dels càrrecs electes. An altre mantra of the opposition to cover the little realization and the null alternative of the government. Yes, the sous is going to bid, fa un any ja, but:

- They continue to be listed below the parameters recomaned by the Federació de Municipis i Províncies.
- I is going to bid the sous de totes and tots els regidors, in the governor and in the opposition, a given that they mostly believe. Nor do they assert that not one of the edils de l'oposition has renounced the increase in diners derived from eixa actualització de sous, which they perceive since 18 months.

5. The climatic emergency and pandemic. The two crises that have marked the day-to-day of regidories that have adapted to correct the new realities, such as the house of the department of Platges, which will manage in a record time the repair of the coastal area without pressure of DANA and l'organització d'unes platges in temps of COVID. Or the Regidoria de Festes, which has reinvented the Nadal davanties of the pandemic that have prevented celebrating as usual.

6. The management of the pandemic: at the front of the first day to prevent the effects and prepare solutions. Social judgments granted per urgency and increased by the minute if necessary; politiques d'occupació per to pose to l'abast of the people to l'atur some possibilities in times so hard; campaigns for the promotion of local commerce; The adaptation of the city to allow the immediate return to normality; the COVID-19 monitoring commission, with the participation of tots els grups politics ...

They have continued 12 difficult months, molt durs. But it has not followed an any lost. By 2021, per tant, the mirem with hope and with the camí ben clar.