The evolution of coronavirus infections in the Marina Alta has remained one of the lowest in the Valencian Community, as demonstrated by the data published daily by the Ministry of Health, which reflects on May 10, 223 infected and 19 deceased. The region is positioned as the fourth in Valencia with the fewest cases of infection, since 130 out of every 100 inhabitants of the Marina Alta have suffered from the disease, with a cumulative incidence of 13 positive cases every 14 days for every XNUMX inhabitants. 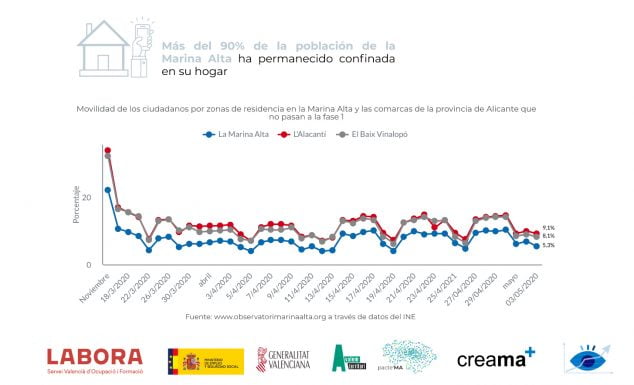 Mobility of citizens in the Marina Alta

In this context, last Saturday the central government ruled that areas go to level 1 of unconfinement, thereby allowing the reactivation of commercial activity (with its limitations) and the extent and form of displacement of people. In the case of the Valencian Community, they have been based on the different health departments scattered throughout the territory, thus 10 of the 24 health areas have passed to phase 1, 6 in the province of Alicante, 3 in Valencia and 1 in Castellón.

Determining the factors that justify this phase change criterion is difficult to discern, since recognizing a better behavior with respect to the rest of the regions is not easy to determine, but based on the words of the director of the Emergency Center of the Government of Spain, Fernando Simón, to answer because 14 health departments of the CV have not passed the phase, justifies, among other arguments, for "the factors associated with the transmission of the epidemic." 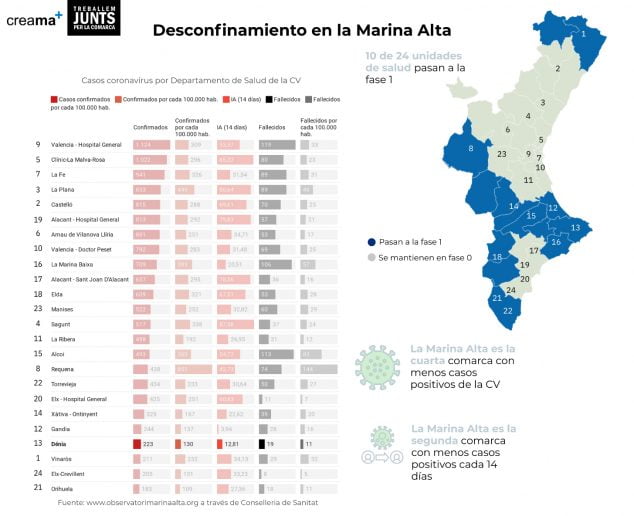 In the province of Alicante, L'Alacantí and El Baix Vinalopó are the only regions that have not changed to phase 1 of de-escalation in the lack of control. Each region differs in the evolution of the epidemic, with the consequent number of positive cases. There is a high incidence of cases in regions located in the capital city of the province, such as Plana Alta in Castellón (more than 1.600 confirmed cases bringing together the neighboring regions that share the Castelló and La Plana health areas) or the Valencia region (more of 5.600 cases among its different health areas -5-, next to the Sagunto and La Ribera areas).

It can help us understand the evolution of the disease by checking that the movement restrictions imposed by the alarm state are met. For this, it is possible to observe the data that, from the state of alarm decree, the INE, without a little controversy, announced the management and exploitation of information obtained from mobiles (leading companies). This study of population mobility, would serve to know the data of variation of mobility of citizens before the pandemic. Observing the average data in the Marina Alta with respect to the 2 regions of the province of Alicante that have not passed to phase 1, we see that the region has the lowest percentages of mobility of its inhabitants.

In a range between 89% and 96%, it is the percentage of inhabitants of the region who have stayed at home, or rather in their usual area of ​​residence during working hours (from 10 a.m. to 16 p.m.) during the state of confinement. (For more information about the project, go to the INE link in its section -Statistical information for the analysis of the impact of the COVID-19 crisis-). To this, added the rest of the favorable conditions, make it possible for its citizens to go to phase 1. To find out how this movement of people behaves in the municipalities of the Marina Alta that enter the project, you can see through the website of the observatori in the news section Covid-19.