In the first segment of swimming over a distance of 350 meters, with the use of wetsuits by the low water temperature, the Dianense marked a record 5 minutes.

In the second segment of cycling, with a tour of 10.000 meters, the road linking Pilar de la Horadada with its beach, Andrea set a time of 19 55 minutes and seconds.

In the last part of the test, with a footrace on 2.500 meters that was developed by the beach promenade, the time Dianense was 10 minutes 29 seconds, still the best of all the participants in each the three segments of the triathlon. 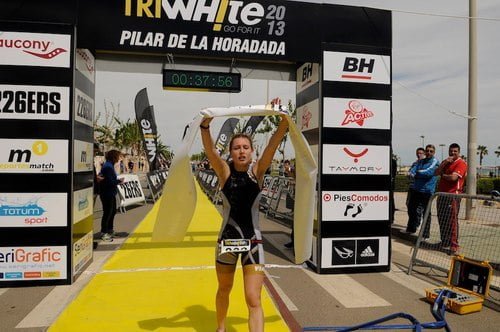 Andrea was the best female, managed to enter the tenth place overall with a total time of 37 55 minutes and seconds.

The next appointment for Andrea Fernández will be the Fast Triathlon Castelldefells, being the first scoring round for the National Championship Series triathlon Spain for Cadete category.