Multiesport duathlete of the Marina Alta, Andrea Fernández He was the winner of the duathlon of Benidorm. A test was developed in the natural surroundings of Terra Natura Park, which took in animals that are there some viewers authentic lujo.L

The first part of the race was running on a circuit run, inside the park between trees and animals in captivity.

The second segment was a bicycle, placing the box in the parking lot of the park itself. This part of the test had a total of 10.200 meters through the access roads to Terra Mítica and Terra Natura.

The third sector was again testing a footrace but this time was outstanding stiffened the tour which was also inside the park.

The Dianense Andrea Fernández was the only one of its club, winning the first place in terms of females and won the sixth place in the overall standings. His total time was 39 37 minutes and seconds.

In the first sector, he marked a record of 10 minutes and 11 seconds. In the bicycle sector his time was 21 minutes and 14 seconds and the last sector on 1.000 meters of race to feet, he made 6 minutes and 57 seconds.

The next event is this Saturday at the Duathlon Aspe, a scoring for the Regional and Provincial Championship test in which the Multiesport will come with several participants. 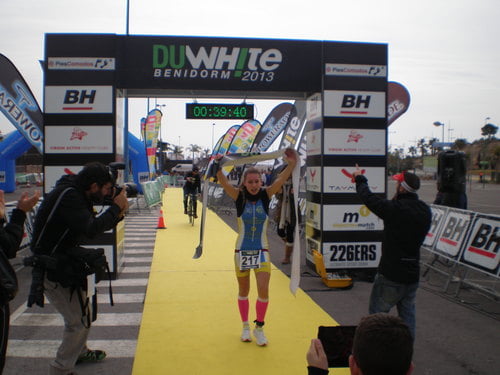 The Dianense, Andrea Fernández entering the Duathlon winner in Benidorm.