When a club is not doing well on the sports level, other aspects that are caught in its trajectory are joined. This was what happened to CFS Mar Dénia during his visit to the municipal pavilion of Martorell. The Dianense expedition became upset and helpless by falling 3 to 1 in a game where for the most part it was better than its rival. 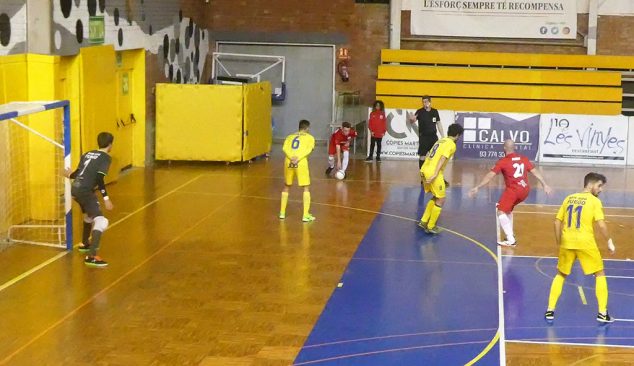 Defense of the CFS Mar Dénia

The game was intense with both squads who knew how much they played, the locals to remain at the top of the standings and visitors to flee the relegation zone. This caused it to defend itself with great force. Given this, the arbitration partner opted for the easiest, to point out all contacts as faults.

In the 7th minute the Dianense team went ahead with a goal from Álex Pla, which surprised the local goal. A goal that gave a lot of confidence to the team that knew how to defend themselves with a lot of order from the Catalan attacks. They managed to reach the break with an advantage on the score of 0 to 1.

The second half began with a strong rhythm on the part of the locals, which caused the dianenses to commit more fouls than those foreseen according to the arbitration criteria, since they set the bar very low. With this strict criteria, any contact was punished with failure. What caused that soon the dianenses were placed with five faults.

With five minutes left, the sixth foul came that caused the Martorell after scoring the double penalty to get the equalizer. The thing got worse when in a clamorous defensive error, the Martorell managed to score 2 to 1. Impotence seized the dianenses who saw how all their good work vanished in just a few seconds.

The referee did not hesitate to show yellow cards to any Dianense player who came to ask for an explanation. This caused Curro to see two for what he was expelled, the punishment against the Dianense player being excessive. Moisés Parra, from the Dianense coaching staff, also had to leave the bench. The dianense goal, Sergi had a great intervention and stopped the double penalty. His companions doubled to defend during the time that the numerical superiority of the premises lasted.

The third goal came after the CFS Mar Dénia team was on the local goal. In a quick exit against the Catalan team served to reach the final 3 to 1 to the marker before the despair of the bench dianense.

Now, the team led by Jordi Durán has little regrets, he has to work hard to face the seven finals that remain to get out of the relegation positions he now occupies. This next weekend there will be no competition for the Spanish Cup, so the closest commitment for the whole of the Marina Alta will be on March 14, receiving in the Joan Fuster pavilion to the Club Natació Sabadell FS.