Alarming increase in the incidence of the coronavirus: almost 200 new cases in Dénia and 12 deaths in the region

After a week without knowing new data, since an update of the statistics was not published since December 29, Sanitat again makes public the incidence of the coronavirus in each health department and in each municipality through the data obtained in PCR tests since last Tuesday. 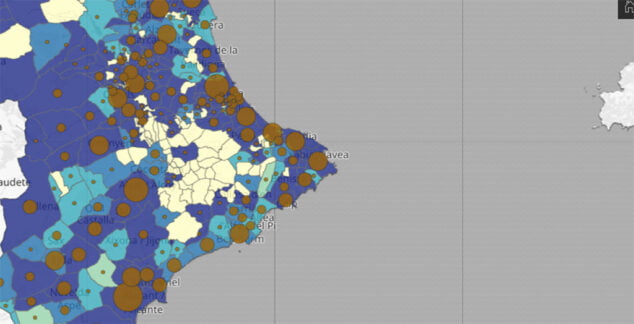 Incidence of the coronavirus in the first week of January

In this new update, the consequences of Christmas are already being appreciated, or at least the first days since it is still too early to appreciate the real impact. In the health department of Dénia, on which the entire Marina Alta depends, the worst day in terms of deaths and infections is recorded again, something that seems that in each update it continues to be beaten.

According to Sanitat, the region would have added 563 new infections this week, the worst historical figure, leaving a total since March of 3.679 people infected. However, if we add the new data for each municipality, we observe that the impact is much higher than that published as a total for the department, since the sum of each municipality would leave the Marina Alta with 599 new positives since last Tuesday.

Now, considering its total, it can already be seen that the accumulated incidence has risen to more than half a thousand cases per 100.000 inhabitants. Specifically, it is located after adding 888 positives in the last fortnight in 517'06.

The worst data, however, is once again the number of deaths, which adds 12 to the total of the positive deaths in CRP in the Marina Alta. There have already been 55 since the pandemic began. Most of these deaths belong to El Verger, which adds 5 new ones, and the rest are distributed among Dénia, Pego, Els Poblets, Teulada, Benissa, Calp and Ràfol, with one case in each locality.

As for municipalities, Dénia is once again the one that adds the most with a new record: 194 new cases. There are already 1.421 since March, of which 288 are still active. Therefore, the capital of the Marina Alta faces its worst days with an alarming incidence of 683'01.

As well Xàbia It exceeds a hundred infections, beating its own record, with 101 new positives that add to the total of 563. Of these, 151 have been registered in the last fortnight, leaving the municipality with an excessively high incidence of 547'02.

Also the rest of the municipalities of the region have seen their numbers of infections increase. In order, 55 new positives have been registered in Teulada, 54 in Benissa, 44 in Calp, 37 in Pego, 24 in Ondara, 23 in El Verger, 20 in Pedreguer, 18 in Gata, 8 in Orba, 5 in Alcalalí and in Benitatxell, 2 in Beniarbeig, Llíber, and Benigembla, and 1 in Vall d'Ebo, Senitja, l'Atzùbia, Ràfol and Parcent.