2020 without parties: at what other moments in history have they been suspended?

We are on what would be the first weekend of the holidays, but the coronavirus health alert has changed many of our plans. Them Festivities of the Most Holy Sang They have evolved with Dénia's society and have been changing over the years. Dénia.com reviews much of the XNUMXth century based on the article by Vicent Balaguer "The party from 1901 to 1975", which appears in the book of Fiestas de la Santíssima Sang of 1994 and which has been provided by the Municipal Archive. Thanks to him we discover what other historical circumstances have made Dénia run out of parties, and many more curiosities. 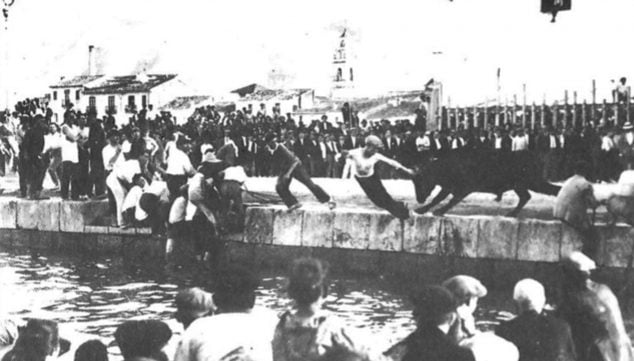 Bous to the sea in the 20s. Photograph from the article by Vicent Balaguer 'La festa del 1901 al 1975' (Arxiu Municipal)

1926 was the first year that Bous a la Mar was held. The first square was attached to a wall of the old Shipyards (Drassanes), forming a rectangle with planks and logs. They were also held in 1927, 1928 and 1929, until a telegram arrived from the Ministry of the Interior that recalled a rule limiting bullfights in permanent squares. This, added to the economic crisis and the arrival of the Civil War, caused the Bous a la Mar to be interrupted until 1943. That year they resumed until 1949 (except in 1944), and were carried out sporadically until in 1961 they returned without more stops.

The Civil War interrupted the festivities from 1936 to 1939

The proclamation of the Second Republic in 1931 caused a certain turn in the party, which until then had been based mainly on religious acts. The municipal corporation came to call them "Summer Parties". They were moments of economic crisis, in fact public aid had been launched for workers without work. For this reason, several councilors were opposed to the parties being paid by the city council, which already had a lot of social spending. Finally, the city of Dénia did run with the expenses of the parties, which cost 2504 pesetas (around 15 euros), considering that they attracted outsiders and that this had repercussions on the local economy. In the following years, spending was also limited, because the crisis continued.

A terrible fire in troubled times

En 1936 An event occurred that marked the moment: in January of that year the fire of the church of the Convent of Las Agustinas due to a short circuit. Everything was razed, including the altar of the Blessed Sang. The brave intervention of a neighbor, José Baldó, saved the image of the Lying Christ of the Blessed Sang. This is how Vicent Balaguer explains it:

During the early 40s, the festivities continued on a very tight budget, mainly destined for religious events, such as processions. In 1948 the collaboration of the fallero world begins in les festes de la Santíssima Sang. New acts appear and the festivals expand, coinciding with the creation of the first failures in Dénia: Oeste, Roques, Centro and Mar. From 1949 the fallas commissions began to collaborate in the festivities with the elaboration of a float, for which they received an economic aid of 1000 pesetas at the beginning (about 6 euros), apart of the prize for the winning float.

Also in 1949, the first Queen of Les Festes de la Santíssima Sang, Vicenta Bertomeu, who in the following photograph appears surrounded by the authorities and a famous actor of the moment, Fernando de Granada. 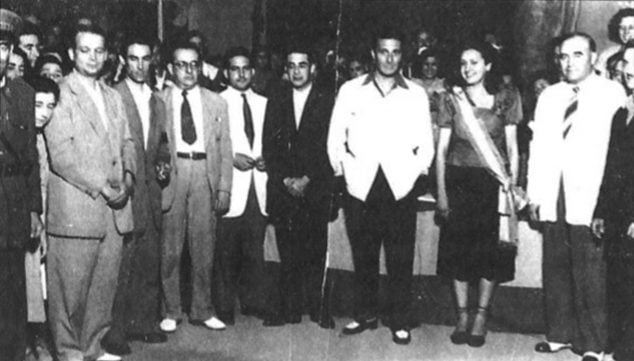